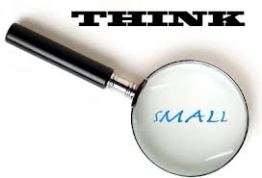 There seems to be a new maxim floating about. It’s called ‘Small Thinking’.

Lots of little ideas in many places are better than one big idea in a few places.

Deloitte’s mention it in their 2103 Toolkit.

It may be because people genuinely believe this. It’s certainly true that brands need to find ways to embed themselves in everyday life.

However, and I may be sounding cynical here (but, I’ve experienced it many times), it may also be that every agency wants to creates its own ideas rather than share in somebody else’s. Small thinking too easily becomes a convenient argument for everybody to do their own thing and improve their own show reel.

But we seem to be forgetting something. Something human.

We have poor memories especially when it come to brands and advertising (there are many more important things in life to remember). If we remember less than 10% of what we read, even when we’re concentrating, how are we supposed to remember lots and lots of little brand activities that we’re hardly concentrating on at all.

Our own experience tells us if we spread ourselves thinly we don’t achieve loads of things, we achieve nothing.  Communications is the same, if you spread yourself thinly across too many channels you don’t make yourself more visible, you make yourself invisible.

The IPA produced a report on this in 2011 which clearly demonstrated that diminishing returns would set in beyond a maximum of 3-5 channels. There really is no reason why this should have changed.

Ask yourself what you remember from 2012. In marketing it’s big things – the John Lewis advertising, the Red Bull space jump, P&G’s “Thank you mum/mom” for the Olympics.

And I suspect it’s the same for brands. Less is More.